Day Two is almost a done deal. And how am I? Well… I won’t say this is a day at the beach… But I must say this cleanse is not nearly as difficult as I had feared. I already feel better and that’s enough for now.

The writing is great. I have rough drafts for 1 ½ of the 12 chapters I hope to finish reviewing during my retreat. A friend sent an email saying that “Virginia Wolfe would be proud”

In the exercise category, I’m also getting full marks today. I walked for an hour and swam laps for 30 minutes. I did some laundry too and hanging out the wash has to count for some major credit.

I almost forgot about not using the phone and started dialing a friend but I remembered in time… Be sure, all of you are in my thoughts.

Keeping in mind that this is a writing blog, I will share another story with you… this time in five parts. By chance a hurricane is also part of this one but it’s oh so different from the last. 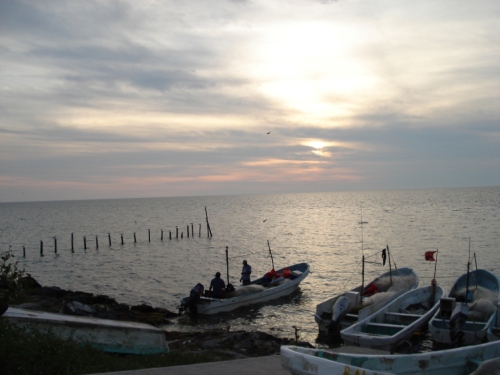 I tossed most of the night. My body felt taught and I couldn’t bear how my spine and the backs of my thighs stuck to the damp, rumpled cotton sheets. I pulled my hair up off the back of my neck and splayed it over the pillow but no matter how I positioned myself, I could find no relief from the oppressive heat. Finally, in surrender, I threw my legs over the edge and slumped down onto the cool floor.

He let out his own defeated sigh, lifted himself up and piled into the hammock. One bare foot protruded from the blue striped cocoon and rhythmically pushed against our bedroom wall, producing an irritating thump-pause… thump-pause… thump…  I gritted my teeth as I lay spread-eagle on the somewhat cooler but terribly unyielding pasta tiles.

It had been four days since Hurricane Isadora slammed hard into Mérida. The power was out and it would be at least another 72 hours before it returned. No AC to cool us down, not even a fan to move the heavy, humid air. We had no running water, telephone, or ice. The room fell silent – no more thumping.

Lying in front of the wide-open window, I tried to catch the breeze that blew teasingly outside in the night. I begged, “Take me somewhere cool.” By that I meant maybe the Holiday Inn for the rest of the night and tomorrow… I knew they had a private generator.

He said “Let’s go to Chiapas! When can you be ready?”

Thank you Jesus, Mary and all the saints! While stumbling around the moonlit room, foraging for a few pieces of clothing and sundries to stuff into my pack, I answered, “Twenty minutes – tops!” I wouldn’t give him half a chance to change his mind.

I felt guilty leaving everyone behind.  I could be helping in the citizens’ clean-up campaign, but no – I didn’t feel quite guilty enough. The ADO motor coach with servicio directo to Palenque would depart at 7 am.

It was to be a modest trip.  We like small hotels and eateries just as well as large chains. We actually prefer bus trips to driving. Some years ago, in South America, I became seasoned to travel on the spring-less seats of salvaged school buses. Since then, riding long distances has never been an issue.

It had been too many years since we last passed along Campeche’s lazy stretches of jade and emerald colored coastline. As we snaked through the fishing village of Champotón , we snickered over the name of the shrimp bar we saw on the left-hand side of the road – El Viagra. That quirky naivety, unique to people from the pueblos is something we’d missed.